I recently updated virtumart in a Joomla 3.6.5 site and got the following error.

It was longer than that, but I needed to fix the site so I don’t the rest would help. I could be wrong.

My last back up was too long ago. I was kind of screwed.

I restored the backup in a close directory on the production server. It was on https so I couldn’t do it localhost. I exported all the virtuemart tables in one MySQL statement by selecting “custom” when exporting. I did have to move the images/stories/virtumart directory. After that the store was operating normally. I made a backup before doing anything else.

I  used FTP and copied the components/virtumart directory over to the site that had issue; however, this didn’t fix the issue. Not sure what broke.

Have customer syncing his Business OneDrive on his personal laptop with Office 365 and his work desktop. The document was created on the laptop, and synced with 365. When he got to work the document wasn’t on his work machine and when he tried to sync he got the following error. 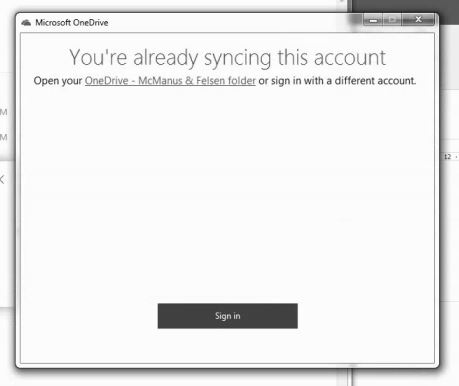 With more probing I found out the  customer had a 40 gig folder he was syncing and it just took time.  That is why the “already syncing” warning came up.

WordPress requesting FTP credentials when trying to update a plugin.

A took over an infected WordPress site. I had Sucuri clean the malware. The hosting was a mess. There were three WordPress installs in this hosting account, but only one was the site. It took a while to figure which one was the live site.

While trying to update core I got the following. 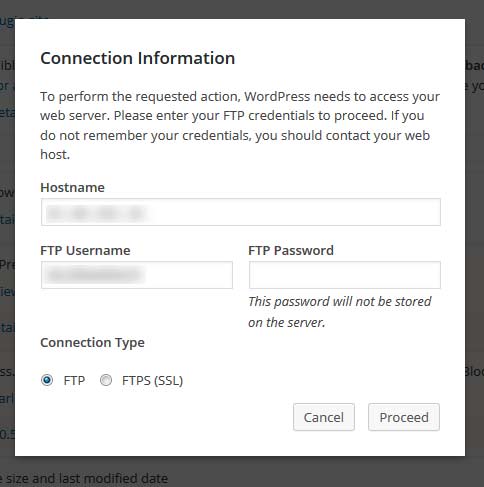 The following article helped me shed some light on the situation.

I was going to change the permission, but Sucuri wasn’t finished scrubbing the malware. If I can remember I will post my results.

To get to a customer’s site I Googled it and discovered the User name and Password reset pages are being indexed by Google. They show up as some of the top results. 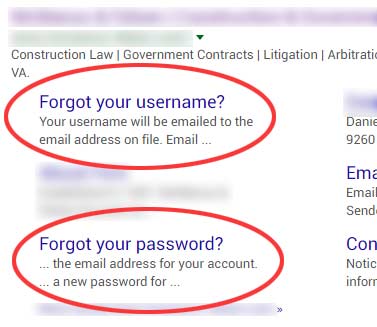 I quickly came across the following article that lead me to the work on the Robots.txt file and disallowing these pages.

For my site I had to add the following:

Then go to Google Webmaster Tools and and Fetch the site. This will inform Google you want your site crawled again.

I stumbled on this article which further refines the access.

Which allows this URL:

But doesn’t allow the following one:

This was bothering me and I was glad it was a quick fix. The following link took me to my fix.

Basically “unpublishing” the “update site” was the ticket.

IP blocked by M&T Bank / mtb.com – how to unblock

We recently installed a Barracuda firewall and accidentally left “Proxy” on.  This caused our IP to used as a spam relay which got our IP put on a blacklist.  A trace route from our server to mtb.com showed the packets getting to MTB.com and stopping. We assumed it was MTB.com blocking the ip.

MTB said they get their blacklist for outside sources. They directed me to the following site were I was able to submit a request to get the IP off of the blacklist.

I could see that the IP was showing as suspect. I clicked on the “IP Reputation” and submitted the IP for review. I knew the proxy issue was resolved the IP should be cleared. This didn’t resolve the issue.

I discovered Barracuda has their own IP blocked. This showed our IP as not having a “poor” reputation.

Do more searching brought me to this page.

There were two sites that had our IP listed. When I tried to go to mailhosts.org I get an error saying that domain is available. Blacklisted with no way to get it removed.

Moving a customers WordPress site to a new hosting plan I ran into this error. 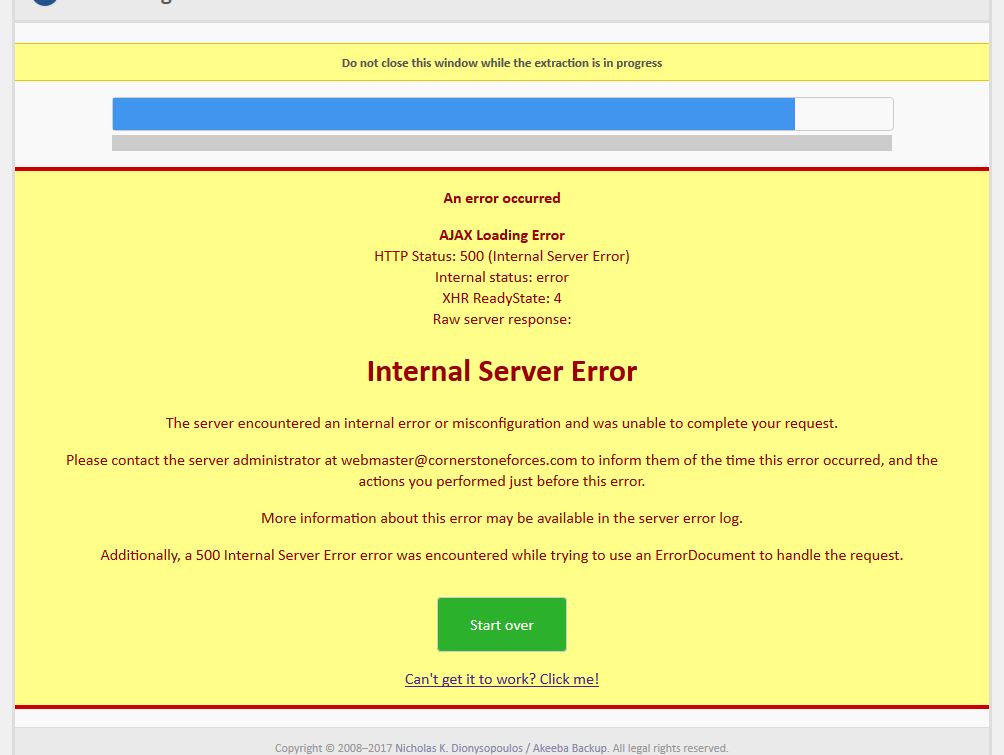 This turned out to be an semi-easy fix. The website size was too large for the hosting. Well not really; however, Akeeba requires 2.5 times the size of the site to fully extract the site.

I looked at the website files to see where I could trim some fat. The site was 400 megs.  There was a folder called “wp-snapshots” which held a backup. I removed all the extraneous files including my first Akeeba backup. Made a new backup which was only 40 megs. This time when I ran Kickstart the site installed without an issue.

Windows 10 doesn’t allow a user to not install updates. Suggestions said to run SFC /now in the command prompt as the administrator. For the scan came back with no errors.

I tried the Windows updater trouble-shooter tool, but this didn’t fix the issue. Here is the link I used.

This following YouTube video makes the suggestion to download the update and manually install it. A number of comments said this worked for them.

They link to the following page:

There were two updates for this Cumulative Update. The main update and the Security update.

I installed the main update. It took a couple of hours. I tried to run the second update; however, it said I had the wrong version. The update packages came from the same page, so I assumed I just needed to restart.

The winner was to go into “Programs and Features”.  In the “Windows” updates area find the troubling KB and remove it.  Run the update manually and this should resolve that issue.

I hope this helps someone else out there….

If you need a form quick this is the best thing I have used.